I dropped the material to be painted with Polly on Monday. The painter will be picking it up over the next week.

While I was at Polly we made a few tweaks to the chassis while running on air. I managed to get a smoother action when notched up in forward gear. I should have videoed it but was paying more attention to the notes I was making of the changes to the timing.

Some top tips (from Andy at Polly) for valve timing:

2 – Note all changes on a piece of paper generally winding in or out half a turn on the valve rod.

3 -Initially move the valve rod in or out at least one whole turn until the loco won’t run. That way you know that you have made things worse.

4 – Move back from the worse position half a turn at a time to see if things get better.

5 – If you pass back to your initial position repeat from step 3 going the other way.

6 – If you end up with a slightly better beat then note the position and leave it setup like that and then move on to do the same with the cylinder on the other side.

It isn’t an exact science but with a bit of a repeat you will get to a good beat on both full and notch-up. Prioritise the timing for forwards gear over reverse as you will rarely need to use reverse.

The observant will see that I have repainted the buffer beams so that they are all looking good for the final fit. I have also repainted the reverser, reach rod and frame which are hanging up in the garage. I have also touched up round the frames with a few bits still to do.

The other tweak we made at Polly was for the boiler feed from the water pump. Matt made me a slightly longer pipe which allows the clack to be mounted correctly (vertically).

Finally, I have been round the loco checking that all nuts are tight (I had an eccentric that had come loose) and have adjusted the spring retainers back down so that the axle boxes are just touching the keeps.

To close out activity before my holiday I have also tidied up around the workbench including using a micrometer to measure all the alien keys and putting them back in the box! 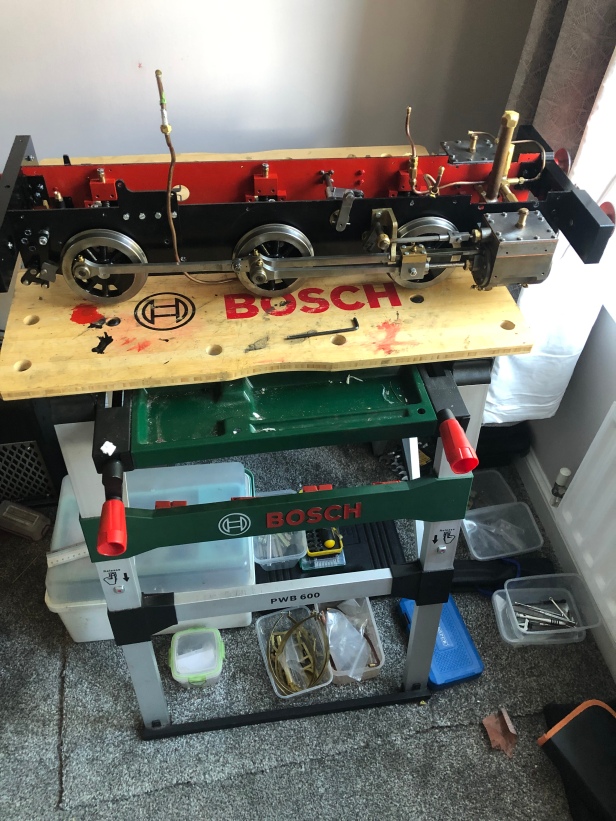