I took the boiler to SCMES today to have it pressure tested.

The sequence of boiler testing for a new loco is as follows:

Test 1 – Pressure test of the boiler to twice working pressure. In this case 180psi (90psi WP). This is just to prove that the pressure vessel is sound.

Test 2 – Pressure test of built loco including steam fittings to 1.5x working pressure. This is to prove that the whole steam system is sound.

Test 3 – Steam test of built loco. This tests that the loco is safe to run by testing the controls and the ability to get water into the boiler while running.

In addition to these tests there will also be testing of the safety valve and of the pressure gauge.

She passed with flying colours which I shouldn’t be surprised by as the boiler had been tested before delivery to Polly. For those of you that like to know these things, the boilers are built for Polly by Brian Nicholls. 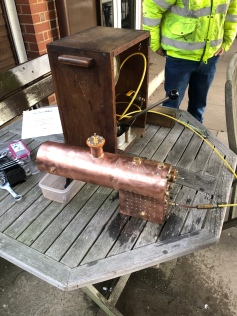 Thanks to Peter McMillan for performing the test and also for the general advice on boiler and steam testing. I spent the afternoon adjusting the pipe runs on Molly Ann and in shaving off the excess gasket material with a scalpel.